Puppet Tree was formed in 2004 and has been performing regularly at the Family Services at St Denys on the first Sunday of each month ever since. We currently have 9 puppeteers and over 50 puppets so there is plenty of scope for anyone who wants to join us and have a go!

We usually perform a sketch (which sometimes involves the puppets donning biblical costumes to dramatise a bible story) and frequently the puppet band will also appear to give a rendition of a pop song, but with the words changed to Christian lyrics.  Several of the puppets claim to have musical expertise and we can therefore produce a drummer, several guitarists, a saxophonist, a trumpeter, a keyboard player and a violinist (but not all at once as there isn’t room in the theatre!). We have even have a grand piano which can be seen making its inaugural appearance in the photograph below. 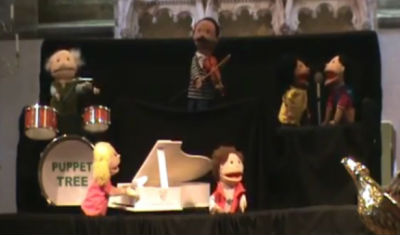 We have had visitors from around the world seeing our Puppets! Recently, Dean Benon Kityo and his wife Bilhah, from Namirembre Cathedral in Uganda came to St Denys' Rotherfield, taking a great interest in the work we do and keen to start a puppet ministry when they return home. 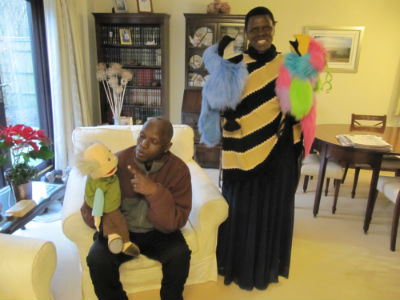 Although our main commitment is to our own church family, Puppet Tree does frequently get invited to other churches to perform and we have appeared at places as far apart as Brighton, Margate, Dorking, Ashtead and Stoke D’Abernon as well as more locally in Groombridge, Chailey, West Hoathly, Blackham, Mark Cross and Crowborough.

We are always delighted when we are asked to help a church start their own puppet ministry team and we have run several puppet workshops for churches thinking of forming their own teams.  So far we can claim to have been responsible for founding four other teams with one more currently being a “work in progress”