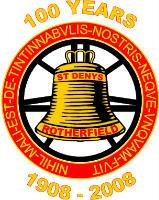 St Denys’ Rotherfield have a committed band of ringers who ring regularly for most Sunday morning 10am services and weddings.  Practices are on Monday evenings at 8pm (except Bank Holidays). We have other social events during the year including an annual ringing outing to give us opportunities to broaden our ringing experience at new towers in different parts of the country, recently visiting Hertfordshire, Kent and Surrey.

We have produced leaflets on the history of the bells and have a some key rings and badges for sale.  Funds go towards to upkeep and maintenance of the bells.

We encourage anyone who wants to learn to ring or who just wants to find out more and observe, to visit us one practice night or to contact the Tower Captain or Secretary.  We can never have enough ringers so you will be most welcome! 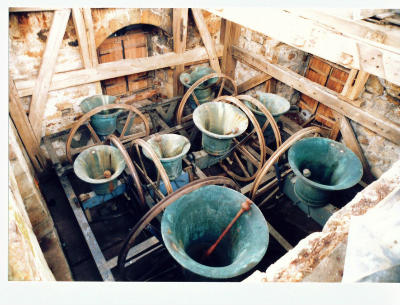 The church of St Denys' Rotherfield celebrated 100 years of the ring of 8 bells in 2008. However, the story of our bells actually covers a few hundred years before 1908, when the church had a ring of 5 bells, the details of which are as follows;

Between January and April 1908, one of the last surviving English bell founders, Mears & Stainbank (now known as Whitechapel), not only recast 3 of the original bells, but through the very kind donation of a local family, the Burts, were able to cast 3 new smaller bells, so bringing them up to the magnificent ring of 8 bells that we enjoy today.

As to the ringers of Rotherfield over the last 100 years, fortunes have changed with each new decade. In the early years there was a waiting list of new recruits wishing to join the established band, only being invited to become a full member on achieving a certain standard in ringing and when there was a vacancy.

In fact one vacancy occurred as early as September 1908 when a member of the band was asked to ‘discontinue being a ringer’ due to regular non­attendance! Obviously both World Wars played a major part in the fortunes of the band; a ringer killed in action in WW1, Owen Holmwood from a local family, is still remembered today on Remembrance Sunday by the present band of ringers.

Originally the bells were rung from the ground floor, where the vestry is now. In the 1960’s the current floor was built above the vestry and the large glass partition between the ringing chamber and the church was installed. Actually, in many churches the opposite took place, when ringers behaviour was so bad that ringing chamber floors were removed so the ringers rang from the ground floor, in full view of the congregation! Obviously, the Rotherfield ringers must have been exceptionally well behaved! 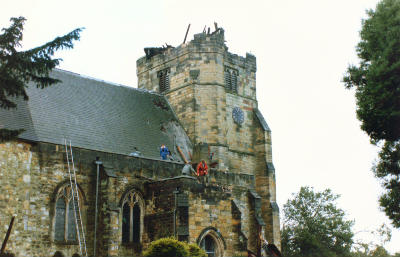 One major occurrence that temporarily disrupted ringing activities was the Great Storm of 1987, when the spire quite literally fell victim to the gales. A large portion of the old spire timbers fell onto the bells, although with great good fortune very little damage was done to the bells and fittings. Armed with chainsaws and lifting tackle, the ringers themselves removed much of the fallen spire and within a few short months the bells were back in action under the temporary roof, which remained in place until the new steel spire was erected with the aid of a helicopter.

Looking back at notable events taking place during the history of our bells, in 1603, the date of our oldest and original bell, Queen Elizabeth I died and James I of England came to the throne. At the same time, 30,000 Londoners died of bubonic plague! 100 years ago when Whitechapel were busy with our bells, Asquith was the Prime Minister and Edward VII was King. Ford motor car company produced their first Model T and in the April FA Cup Final, Wolverhampton Wanderers beat Newcastle United 3-1!