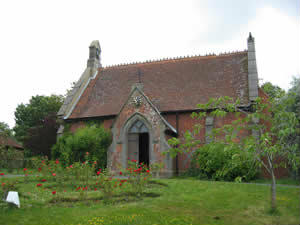 Mark Cross parish church was built in 1851, not as a church, but as a national school for village children aged between 4 and 11. This explains why it doesn't have the customary east/west alignment. Being one of the largest buildings in the village, it also served as a community meeting place in which church services were held on Sundays.

In 1873 a new larger school was built on land bought and endowed by a school governor, Mr Henry Dixon of Frankham Park, who also built the adjacent vicarage. This new building formed the nucleus of the present Church of England Primary school. The old school building was then adapted and extended to provide a chapel and consecrated as the parish church, dedicated to St Mark. The first baptism recorded being that of Kate Ellen Parsons on 10th August 1873. The Rev. Herbert Hunter Phelps was the officiating minister.

He had been appointed to the living by Mr Henry Dixon who had been largely instrumental in the creation of the new parish and, having contributed a capital sum towards the endowment, had been granted the advowson, the right to nominate successors to the ministry of St Mark's. The list of vicars displayed in the church reveals that one, the Rev. James Price, served the parish faithfully for 50 years. His annual stipend was £202 6s 10d in 1887.Built of red brick with stone dressings, a large `east' window of plain glass set in ornate stone carving and a bell-cote housing the original school bell, this beautifully simple church was originally furnished with seating for 100 people. It is, and always has been, treasured and cared for by the parishioners of Mark Cross.

The Churchyard is consecrated ground and has a Garden of Remembrance at the `east' end with provision for the burial of ashes. Standing within it is a seat dedicated to the memory of Margaret Walter, last in a long line of members of the Walter family from the Mark Cross area. Thanks to Margaret's generosity the church has been renovated and the side chapel adapted for use as both a place of prayer and meeting. A Book of Remembrance stands there, in which are recorded the names of departed loved ones.The interior of the church displays remarkably few memorials considering the devotion which parishioners have shown to it down the years. But their gifts are there and are used in the regular worship of the church as they would have wished. The memorial gifts include the reading desk, lectern, hymn and psalm boards, altar cross, candle sticks and vases, Holy Communion silver, sanctuary chairs, bell wheel chandelier, and flagpole and Baptismal ewer. The side altar frontal, hand painted on silk, represents St Mark. It was worked, in memory of Mark Staniforth, by his sister. The only wall tablet is the War Memorial erected in memory of Mark Cross men who died in the Great War 1914-1918.The remarkable church clock was given by the parishioners and their friends to commemorate the Diamond Jubilee of Queen Victoria. The clock face is mounted over the front entry door and the mechanism is installed in the vestry at the back of the church. The ingenious overhead linkage is worthy of particular note. To mark the millennium, the church bell was reinstated in a newly strengthened tower. Also in the millennium year, along with many other churches, a commemorative yew tree was planted in the churchyard. At its base a time capsule was buried. It contains the prayers and hopes of all the children then at Mark Cross School, to be opened in fifty years time.The hassocks and altar cushions were covered with tapestry by parishioners, to commemorate the church centenary in 1973. The work took eight years and the altar cushions and seventy hassocks were dedicated at Easter 1981.The organ, built by Hopkins of York is a single manual instrument, originally hand blown, and dates from the end of the last century.The last resident vicar of Mark Cross died in 1975. The vicarage was then sold and the Parish linked with Rotherfield in a Combined Benefice in 1984, from that date until 1994 it was cared for by successive rectors of Rotherfield assisted by retired clergy and lay readers.Colourful memories remain among the current congregation. For example the regular 6.00pm evensong, the chiming of the one church bell, the original school one later replaced (for a time) by the sound of an amplified recording of a peal of bells, the amplifier being hung on a tree in the then vicarage, garden (now Brandywell Nursery) and of the pumping of the hand blown organ with all the associated catastrophes!As with many small Sussex villages, basic alterations in the social life and population have created many changes. The most notable perhaps, in recent years, being at the end of the 1950s when the new road to Eastbourne cut right through the cricket pitch, and in some ways cut the village in half. During the next twenty five years there was a steady loss of many of the local personalities and the closure of shops and businesses, but paradoxically this period of gentle decline caused the parish church to become involved in far more than just "hatch match and despatch". With no full time clergy, more and more lay members found themselves, often to their own astonishment, representing the Church and helping to organise things, probably the most important of these being the Silver Jubilee celebrations of 1977. All the necessary planning and fundraising led to the rebirth of the village cricket team and the formation of several other organisations, as well as producing some memorable fetes, fairs, horse and dog shows.Parish life goes from strength to strength and the round of worship has continued unbroken. The ties between church and school continue to be strong, the school's 1995 development scheme even leading to a temporary classroom being made in the side chapel! Collective school worship is held daily in the church and there are regular visits from the Vicar.The Church is the family of Christians meeting together to worship God and to find fellowship together in prayer and learning. A parish church by its very nature exists to offer all this in the locality for which it is responsible. Details of the services are on the notice boards. Information on these, as well as all other village activities, may be found in the monthly magazine, available in the church and in various outlets in the village. You are most welcome to join us. Those who do so are often surprised to discover such a thriving, all-age, family orientated community.